Tatsfield Churchyard has one of the finest settings in this neighbourhood, and is visited by many people; relatives visiting graves, pilgrims visiting the church, others seeking out a place of beauty and peace. The responsibility for its care and maintenance falls on the Parochial Church Council (PCC) and the cost is met almost entirely from the gifts of those who love St. Mary’s and worship there. The maintenance of churchyards is governed by regulations which PCCs have little or no power to alter; some are laid down by law, others are made by the Diocese, which for St Mary’s is Southwark. Many of these regulations relate to graves and memorials. It will avoid misunderstandings if it is appreciated that when a burial has taken place in any churchyard, the relatives do not acquire ownership of the grave or the right to erect any headstone or memorial, or to plant the surface – except in accordance with the current regulations.

If these sound fussy and bureaucratic, then we trust that those who have an interest in the churchyard will accept that these legal requirements are intended to safeguard its character and beauty for all to enjoy. A significant factor is the need to ensure that the safety and efficiency of maintenance of the churchyard are assured in the long term, including when relatives may have ceased to be able to maintain the grave.

The PCC has adopted a management programme for the Churchyard, copies of which are displayed at the church and are available from the Rectory. This programme has been constructed to ensure reasonable tidiness and access to graves while encouraging conservation of wildlife. This involves different treatments for the many areas of the Churchyard, some are kept frequently mown, others permit wild flowers and natural grasses to blossom and seed. The execution of this programme is, for financial reasons, largely in the hands of local voluntary assistance. Offers of assistance are most welcome either at one of the regular tidy-up mornings or at any other time.

Mowing and strimming are time consuming and can be inhibited, indeed made dangerous, if containers, glass, stones etc. are left on the surface, or if hollows or mounds are present, or if gravestones or grave boundaries encroach on the pathways.

The appearance of the Churchyard depends upon the scale and intrusiveness of its features, including gravestones. It is therefore important that these are subject to regulations which are described below; within these limits there is proper scope for creative design and endearing originality, as is evident in both the oldest and the most recent of the tombstones at Tatsfield.

However there are also some tombstones which have been introduced in the past which do not conform to the current regulations. This does not affect the validity of these regulations and the existence of these memorials should not be taken as an indication that similar ones would now be permitted.

b)      Unused spaces may not be reserved and it is usual for the next adjacent available space to be used; the position will be agreed by the Parish Priest. Family graves may be reused provided that previous burials have been at a sufficient depth.

c)      Graves are to be kept flat with no mounds. Kerbs, railings or chains are not to be used. There should be no encroachment onto the adjacent paths: this would create mowing difficulties. Chippings should not be placed on the grave as they inhibit mowing once the grave has ceased to be properly maintained.

d)      Wreaths or flowers in a removable container may be placed on graves but should be removed before becoming withered. Empty containers should not be left on graves. Artificial flowers are not permitted except for Remembrance poppies which should be removed after a period of two months. The PCC reserves the right to remove and dispose of such items when necessary.

e)      If a grave and its surrounding pathways are kept well maintained, bedding plants and bulbs may be planted. No planting of items such as shrubs or trees is permitted on graves. Relatives wishing for any additional planting should approach the PCC who will consider the request in the light of overall future planning of the Churchyard.

f)       If the surface is grassed and not well maintained by relatives, the PCC will endeavour to keep it cut: this could endanger any plants or bulbs present.

g)      If the surface is not grassed and not well maintained by relatives, the PCC may carry out any necessary levelling and allow the surface to become grassed.

a)      Permission must always be obtained to erect or modify any memorial. It may be helpful for relatives to hold informal discussion with the Priest in Charge of St. Mary’s [PiC], or their representative, before any firm proposals are made. Relatives should then write to the PiC using a form which is available from the Rectory with full details of any proposal and await written permission before they take any further action. Permission for a memorial which conforms to the description in (b) to (l) below will normally be granted by the PiC unless it is considered that it is likely to be controversial or is in any way inappropriate. For any other proposal it will be necessary to submit a petition to the Chancellor of the Southwark Diocese for a Faculty; the Diocesan Registry will supply the appropriate form for this application.

(i) a vertical headstone

(ii) a vertical headstone on a horizontal stone base

(v) a stone mounted at a slight angle to the vertical

e)      in the case of a stone memorial, it is of natural stone (either sandstone, limestone, granite not darker than Rustenberg grey, or slate) and does not have a highly polished reflective finish.

f)       in the case of a memorial consisting of a vertical headstone, with or without a horizontal stone base:

(g)     in the case of a memorial consisting of a vertical headstone on a horizontal slab:

(i) the base is an integral part of the design

(ii) where it incorporates a receptacle for a flower vase, there is provision for no more than one such vase

(iii) where it incorporates a receptacle for a flower vase, the base does not project more than 200 mm (8 in) beyond the face of the vertical stone

(h)     in the case of a memorial consisting of a horizontal slab:

(ii) its upper surface is flush with the surrounding ground

(j)      the inscription on the memorial contains at least:

(i) the name of the deceased

(ii) the date of his or her death

(iii) the date of birth or the age at death

and any factual material in the inscription is accurate

(k)     the inscription and any artwork is incised into the stone and, if painted, no more than one appropriate colour is used; and

(l)      the memorial contains no advertisement or trademark other than the name or mark of the mason which, if included, shall be at the base of the side or rear face of the stone and no more than 13 mm (1/2 in) high.

In addition the following may be helpful:

m)     Headstones need not be rectangular. For example, curved tops are an alternative to straight-edged ones

n)      Figure sculpture and other statuary are not discouraged but require a Faculty.

o)      The memorial should commemorate, accurately, the existence of the person who has died, by recording his or her full name, or at least the surname and first name by which he or she was generally known (for example, “Thomas Joseph Smith” or “Thomas Smith”). It is perfectly appropriate to include as well any term of affection or widely-used nickname, perhaps in brackets (for example, “Thomas (Buster) Smith”). Generally terms such as “dad”, “mummy” or “nan” are best avoided, but this is not an absolute rule.

A name on its own says little; and misses the opportunity to say something publicly about the person who has died. There is much to be said for trying to express the precious and powerful qualities that made a person unique and loved. The inscription may record what he or she did (“district nurse” or “local councillor” or “craftsman”) or simply some feature of the deceased’s character (“much-loved husband, father and grand-father”).

Some may wish to add a scriptural text, or an extract from a poem, or some other suitable words, consistent with Christian theology and inspired by reflection on the life of the departed. Any inscription should be short and to the point; and should avoid the trite, the home-spun, or the overly sentimental. The vocative case should be avoided (for example, “he was much loved” is preferable to “you were much loved”).

Carved artwork may be included – either traditional Christian symbols (such as the Cross, though use of more than a single cross is to be avoided, since that reduces the Cross to mere decoration), or other decorative items (such as flowers), or, where appropriate, some other device reflecting the life of the person who has died – an example might be a book in the case of an author, or a palette in the case of an artist. Sometimes in the case of a child a much-loved toy might be included. As a general rule, decoration should be kept simple and a minimal approach adopted.

p)      Additions may be made to an inscription at a later date following a subsequent interment in the same grave; such an addition must be separately approved and the lettering, layout and wording must be consistent with the original inscription.

q)      Should it be necessary, for any reason, to remove and/or replace a tombstone, permission should be sought from the PiC: such work must be carried out by the gravedigger appointed by the PCC.

a)      All cremation plots are to be dug by the gravedigger appointed by the PCC.

b)      The position will be agreed by the Parish Priest and will normally be the next available space.

c)      In common with many Churchyards and because the ground is so hard and full of tree roots, all ashes are buried without a casket.

d)      The position may be marked by a stone tablet whose size should not exceed 9″ square. The material should be as specified for the gravestones above. The tablet should be laid so that its upper surface is flush to the level of the surrounding ground; tablets for which this is not so may be relaid by the PCC to facilitate the maintenance of the area.

e)      Containers with flowers, cut or growing, may be placed on the space, provided that, in total, they are no more than 15″ in height and 9″ in diameter. These should be removed before becoming withered. Empty containers should not remain in place. Artificial flowers are not permitted. Containers may not be sunk into the ground, although those with a short spike to hold them in place are permitted. The PCC reserves the right to remove and dispose of such items when necessary. In order for the grass to be cut all such containers may be removed and will be placed alongside the cremation plot.

f)       No planting of any kind is permitted in the cremation plot.

This provides the opportunity for memorials to those who had significant connections with the area of Tatsfield but whose remains are not within the churchyard. Application should be made to the PiC using a form available from the Rectory. If approved the PiC will, following receipt of the current fee, make arrangements for a plate of the approved design and wording to be placed on the bench.

This is provided for the collection of decomposable (i.e. vegetable and paper) matter only. It is unrealistic for the PCC to provide for the collection and disposal of other items such as glass, plastic, metal oasis; these are a considerable nuisance if left anywhere in the Churchyard, including, the refuse area, and must be removed by those responsible for their initial introduction into the Churchyard. 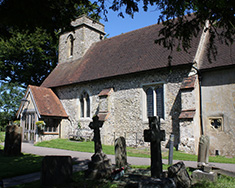